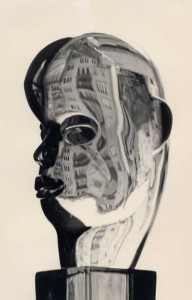 While living in Frankfurt, Germany in the late 70s-80s, this glass head was my magic mirror, reflecting the world around me. It was purchased in late 1971 before my first husband and I set sail on a cruise from Venice, Italy to our new home in Cyprus.

We hopped on a water taxi near St. Mark’s Square for a short ride to Murano, an island in the Venetian Lagoon where glass has been made for more than 700 years. We followed small groups of tourists in and out of several large factory showrooms where glassblowing demonstrations were short, but fascinating to watch. Ambling down a side street, we came across a smaller art gallery. We entered and looked around, eyeing the colorful art on display. Within a few moments, a salesman joined us and asked if he could be of assistance. Seeing our casual attire (we were dressed in jeans and sweatshirts), he directed us to the “affordable” section of the shop where glass goblets, clown statuettes, and other glass trinkets were displayed.

“We’re actually looking for something unique. One of a kind,” I said.

He looked at our casual attire again, tapping his chin.

“An original piece of art,” I said.

“We do have original works,” he said, “but they’re quite expensive.”

“How expensive?” I asked.

“Very,” he answered. “They’re one of a kind done by glass masters.”

“That’s what we’re looking for. Something unique for our new home in Cyprus.”

As we entered a large, dark back room, we saw glass sculptures sitting in rows on deep wooden shelves. He excused himself then switched on lights.

“Oh my,”  I exclaimed, seeing the brilliance of glass on display flooded by light.

He nodded. “These are the finest works of glass art anywhere,” he announced, inviting us to look around.

“I love this one,” I said, walking toward a smokey black solid, glass head sitting atop a amber colored solid glass pedestal. “Is it for sale?”

“Yes,” he answered, lifting the heavy piece off the shelf and placing it carefully on a table near a window. He took a cloth from his pocket and wiped it clean.

“Wow!” I said, watching the African shaped glass head reflect its surroundings. Like a magic mirror the image changed each time I shifted my angle of view. “It’s exquisite!”

“It is, but quite expensive,” he said, knowing I really wanted it.

“How expensive?” I asked, eyebrows arched.

The salesman scribbled some figures on a a piece of paper and showed us the final figure.

I looked at my husband. He nodded.

“You will?” he asked, looking surprised.

“I’ll get it boxed for you,” he said leaving the display room.
While my husband signed numerous travellers checks to pay, I turned the head to reflect different angles and stroked the smooth surface of the glass.

The salesman returned a few moments later with a box and packing material. Before placing the head in the box, he showed us the artist’s signature on the bottom of the pedestal.
Siguoretto Pino, 8-8-71

“Wow!” I sighed, rubbing my fingertips over the signature.
“Would you like to meet the artist?” he asked, smiling.

“Follow me,” he said, inviting us into the hot furnace room. A smiling young man walked toward us.

“Your work is beautiful! It will have a special place in our new home in Cyprus.” I said, beaming.

Waiting on a water taxi to take us back to Venice, I asked my husband to guess the age of the artist.

“He’s quite young,” he answered.

“Looks too young to be an Italian master glass artist,” I said.

Years later I learned that Siguoretto Pino was born in 1944 in a small town near Venice. In 1954, at age 10,  he began working in a chandelier factory.  In 1959 he apprenticed for the great master Alfredo Barbini and others, and in 1960, at age 16,  he became a master Italian glassblower. In 1978 he opened his own studio in Murano. Today, Venetian maestro Pino Signoretto is recognized as one of the preeminent glass sculptors in the world, universally recognized for his mastery in sculpting glass while hot.

Following the Cyprus War in 1974, the glass head was removed from our home by a neighbor for safekeeping (the same wonderful neighbor who looked after our cat Sam when we were evacuated from the island). The head was later packed and shipped to us by our Turkish friend, Sabri Tahir. Sabri (a main character in the book, Bitter Lemons by Lawrence Durrell) became the new mayor of Kyrenia/Girne when the Turks captured northern Cyprus.

The glass head continues to brighten my life and home. I feel a surge of creative energy each time I look into its magic mirror–reflecting light and life around me. 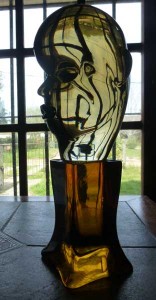 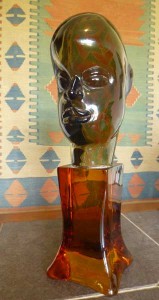 6 Replies to “My Magic Mirror”