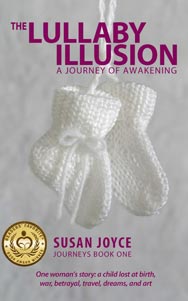 The Lullaby Illusion
A Journey of Awakening

[two_third_last]As a child, Susan lived for the clarity of excursions, with her dog Brownie, in the Arizona desert. To escape the chaos of her crowded home. And her Pentecostal preacher father. When she came of age, a husband promised a new life of adventure. And freedom.

To Israel. To Cyprus, and a war that somehow involved her husband. Her clairvoyance almost got her killed in Belgium, and left her penniless in the street. In Germany, she reinvented herself as an artist and writer.

This twelve-year memoir of profound personal transformation and friendships is a true page-turner. You will find yourself repeatedly asking “what could possibly happen next?”

There’s tragedy, discovery, and change. There’s tension, drama, and the unexpected. All the elements of a solid, compelling fiction read are here – but The Lullaby Illusion is nonfiction; it’s all true. It’s Joyce’s world brought to life in a memoir that will prove riveting reading for any who relish autobiographical stories of a spectacular existence well lived, filled with both the richness of paradise and the poignant saga of a perfect world that unravels until it’s ready, once again, for a new infusion of meaning and commitment.

Goodreads reviews for The Lullaby Illusion

The Lullaby Illusion is a tragic and uplifting story about life, loss, and facing those things beyond which we have no control – and figuring out which ones we do. The story traces a certain period in the life of the author when her tranquil existence in Cyprus is suddenly blown up, figuratively, but also literally, by war. The experience of coping with, surviving, and then escaping for safer ground plays out in interesting parallel with other traumatic events in Joyce’s Young life – namely, the loss of her baby and multiple miscarriages, as well as the revelation that her husband is not who she believes him to be. Joyce’s relationship to her vivid dream life, as well as her artistic spirit, guide her through these tragedies to stable – and fulfilled- ground. A must read for anyone who is interested in stories that trace survival and resilience in times of duress.

The Lullaby Illusion is an exquisitely executed memoir, which leaves you spell-bound as you follow Susan’s metamorphosis; as she loses herself in her husband, the enigmatic Charles, following their dream travelling the world.Through miscarriages, betrayals and escaping war torn Cyprus to her re-awakening in Germany as an accomplished artist, Susan eloquently tells her story. The characters leap off the page, you can actually hear the dialogue, feel her fear, sadness and joy – it is easy to forget that this is a memoir and not fiction. I would love to see The Lullaby Illusion made into a film, and I hope she writes more about her life, and soon.

There is so much more to this book than the aspect I am going to rave about. So often I have read books, and seen films, that either gloss over, dramatise or make war appear heroic that I think that when this is well done, as it is in the book, it is well worth highlighting. Here is a writer who describes being caught in cross fire with all the grim realities and slightly surreal disbelief that it is happening to her. A more realistic and consequently more terrifying account I have yet to read. As for the other aspects of the book – read and find out, this lady has had quite a life.