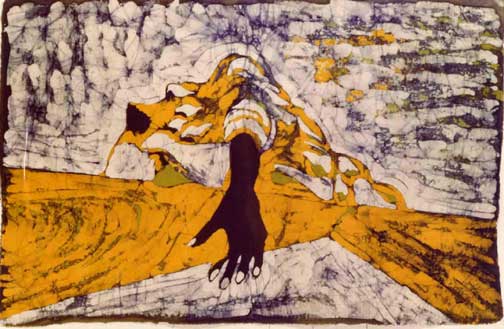 As early as I can remember, I’ve felt a presence of protection around me, someone assigned to assist and guide me during my journey on earth. A helping hand. My very own heavenly representative. Mine never appeared as a chubby cherub but she did have wings, a long flowing robe, and moved like a graceful dancer.

One time, she appeared as a playful dog scampering through the woods with me one late night in Germany. I had just missed the last tram home and decided to walk a short-cut through the woods to my apartment. The dog joined me as soon as I entered the forest path, licked my hand, and stayed by my side until I arrived at my apartment. I turned to pat her head and say thanks but she had disappeared into the night. I never saw her again, but I was aware of the protection she provided. It felt like the same energy I had known as a child with my all-knowing, winged spirit guide.

Shortly before my first art exhibit in Frankfurt, Germany, I received a telephone call from a woman who collected art. I asked her how she knew about my upcoming exhibit. She said she saw a poster plastered around a column in a local U-Bahn station and found herself drawn to it. She found my name and telephone number in the local telephone directory. She asked if she could view the paintings before the show’s opening night. I agreed and she came to my studio immediately to see my work. Exotic looking, she arrived in a beautiful pink Indian sari, I noticed she also had a red dot painted on her forehead. After viewing the paintings, she asked if she could purchase the one titled, “Helping Hand.” I, of course, was delighted and told her it was my guardian angel’s hand. She nodded and insisted on paying me before the opening. She agreed to send a check and promised to collect the piece after the exhibit was over. She smiled and said, “It’s good to have a ‘SOLD’ or ‘ON LOAN from a private collector’ sign on a work on opening night. Helps sell art.”

Knowing I was down to my last pfennigs, and wondering where the next money was coming from, I agreed. The entire time she visited me, she seemed familiar. As though I knew her from another place or time. Perhaps it was déjà vu.

That night, I dreamed of my guardian angel from childhood, the one with the long flowing robe, sort of sari-like. When I was little, she was much bigger and better at everything than me and always got me out of tight spots and often helped steer me to safety over an old swinging, rickety bridge. As a storm stirred overhead, dark shapes lurked in the raging river below. This time I realized that I was crossing the bridge alone. When I turned my head to look behind, I saw myself as a child and the guardian angel of my youth fading away. I heard a voice say, “You’re almost there. Follow the moonlight.”

Just as I reached the other side and landed firmly on solid ground, I watched the bridge collapse and crash into the river below. By heeding her advice, I had saved myself. I awoke the next morning feeling grateful to all who helped me in life. I had a long list of helpers.

A check arrived in my mailbox three days later, to pay for the painting, I was elated and invited a friend to lunch to celebrate.

My first art exhibit was a great success. By evening’s end, every painting had a red dot on it showing it was sold. My eyes searched the crowd for the red dot on the Indian woman’s forehead but she wasn’t there. A man collected the painting a month later, after the show closed.