A seasoned professional writer for over 40 years, he holds a BSc (Honours) degree in technology (in which he managed to squeeze a course on writing for theatre), and an MA Professional Writing from University College Falmouth (in Cornwall), which specializes in media. For his last year, he chose to specialize in scriptwriting.

He enjoys swimming, reading, watching lots of screen drama, and searching for that elusive moment of self discovery. He’s also helping to republish the novels of British writer, Leo Walmsley.

Graham Higson hides in an outlying Pennine village. (The Pennines are a range of mountains in Northern England which separate North West England from Yorkshire and North East England.) Graham shares this blustery environment with his wife Margaret, a growing collection of books, and a workshop piled high with offcuts of oak. His two grown-up children are among his best friends.

A childhood fascination with television and radio turned into a teenage reality when he began interviewing celebrities for his school magazine. He said meeting them was like stepping through the television screen and getting to know the real people behind the public facades.

His eBook, “All Creatures Great and Famous” tells the story of meeting Gilbert O’Sullivan (my favorite) and many more. It can be purchased for just 99p on Amazon. https://www.amazon.com/dp/B018PWSMY0

Susan Joyce: Was music a big part of your early life? Writing? Reading?

Graham Higson: When I was 2, I played records on my brother’s Dansette record player. My mother bought one record per week and my early years were shaped by such people as The Seekers, Guy Mitchell, Elvis Presley, Dusty Springfield, and The Beatles. As a teenager I would record songs from the radio and I still have all of my cassettes. Getting rid of such things is a bit like ditching your past, and I can never bring myself to do that because I need to have the items that remind me of people who are no longer around; I may never actually use them again, just so long as I know they are there.

At secondary school I liked Gilbert O’Sullivan’s quirky lyrics and range of styles. His was the first chart LP I ever bought. I liked it so much I went and bought his other album the following week. Ten months later I interviewed him after a live show-stopping performance.

As a child I read a lot, and was particularly taken with The Magician’s Nephew, C S Lewis’s prequel to The Lion, the Witch and the Wardrobe in the Narnia series. From an early age I could see that this story had it all: boy and girl protagonists, visiting other worlds, bad things happening, and moral implications. Good triumphs over evil, and love wins in the end; that’s just as it should be.

Susan Joyce: I love the story of you interviewing Gilbert O’Sullivan. You were only sixteen. That must have been awesome.

Graham Higson: Whenever I hear Get Down, I remember him performing it live at Batley Variety Club in 1974. My father drove me there to interview Gilbert and for over an hour we stood in the smoky night club atmosphere, watching his spectacular performance. Later that night I met the man himself  (no pun intended – Himself was the title of his first album): 27 years old, outselling Rod Stewart and Elton John. What a memorable experience.

Susan Joyce: What age were you when you did your fist interview?

Graham Higson: No, I didn’t get to interview Sir Roger Moore face-to-face, though I put a question to him as a member of the audience, and when I was 15. I had a front row seat at the Royal Shakespeare Theatre in Stratford when Timothy Dalton (who became Bond #4) was playing Romeo. So that’s two Bonds I’ve seen. Other entertainers? Let’s see… off the top of my head I can think of Shirley Eaton, the Bond girl in Goldfinger, David Soul (Starsky and Hutch), Alan Davies (who plays Jonathan Creek), Robert Beltran (Star Trek: Voyager), and others who are known mostly in the UK.

Graham Higson:  Yes, I do enjoy meeting famous people and getting to know them. This why I’ve recently begun interviewing authors for eBook Showtime. We’re using Skype which, after all the technical things that can go wrong, and all the background chatting that goes on behind the scenes in preparation, by the time we have a working 15-20 minute show it feels as though we have known each other for years. I like to count my victims-sorry, I mean subjects as my friends. I only hope they feel the same about me. No one’s said otherwise… not yet they haven’t.

Susan Joyce: Do you play a musical instrument?

Graham Higson: I played the trumpet at school, but wanted to be a keyboard player, so in my teens I began playing the piano and organ. I learnt a great deal about technique by watching professional theater organists at weekly concerts in the 1980s and bought a massive theater console with full keyboards and pedal-board. It was almost too large for the house we lived in. Around 25 years later it began smoking one night, and it had to be scrapped. I’ve not played since. Now I’m left with a comb and paper–does that count as a musical instrument?

Susan Joyce: Of course it counts. I can remember being taught how to make a comb and paper instrument. Fun! I’ve since learned how to make my wine glass sing.

Graham Higson: I was joking about the comb and paper—I’ve not been able to find a comb for years. I can’t even find the hair to use it on. 😉

Susan Joyce: (laughs) When and how did music hit you big time? What music inspires you most? Do you have a favorite era?  One you are still exploring?

Graham Higson: When Freddie Mercury died in 1991, I rather took to Queen; it started when the BBC screened a tribute documentary about Freddie and, at the very end, played the video of Days of Our Lives (the first time it had ever been seen on TV). In this, his last video performance, it was obvious he was terribly ill. At the end he looks straight at the camera and says, “I still love you.”

That was what did it for me. My interest in Queen was something my wife and children had been waiting for, so we went all-out and bought the whole collection of CDs and videos. In my mid-teens I had also taken a liking to the Carpenters–so you see my tastes in music  are a right old mix. In answer to your question, this looks very 70s-based, doesn’t it, as that’s the decade when Queen started? But really I take whatever I like from wherever I find it.

I particularly like the inventiveness of the Queen videos. But if there’s one pop video that really makes me feel happy it’s Michael Bublé’s I Just Haven’t Met You Yet. It gets me every time. And no, I’m not a romantic. Well, I wasn’t the last time I checked.

I rather like television theme music; have done since the late-60s when I used to record them on 5-inch tapes using a hand-held microphone. Still got them too, and my dad’s tape recorder. Theme music has since become a multi-million dollar industry, and I like to think I was one of the first to recognize it as a serious commercial genre.

Susan Joyce: Is Leo Walmsley a writer you admired? Were you introduced to his work in school?

Graham Higson: My wife and I came across Leo Walmsley when we visited the rather picturesque village of Robin Hood’s Bay on England’s North Yorkshire coast in 1989. There was a commemorative plaque on the house where he lived as a boy, but it was 1995 before we bought one of his books, then when we returned home I just had to order the only other two books that were still in print at that time. It feels strange that in recent years I have re-edited and republished these very titles – and most of his other books too. They tend to be classed as “semi-autobiographical”, a term I don’t think he much liked, but which I would call fictionalized memoir, not unlike Gerald Durrell’s My Family and Other Animals, the James Herriot vet books, and my own How Much For a Little Screw? Hmm, come to think of it there could’ve been some influence at work there.

Susan Joyce: I know you enjoy screen drama. Have you written any screen scripts? I’m taking a screen writing course and absolutely love this unique form of writing.

Graham Higson: I did a 2-part mini-series of Flither Lass (that later I turned into a novel), a little 1-hour fun romantic comedy called Good Cop, Bad Girl, and a 10-minute short set in a Victorian coal mine, The Trapper Boy. This year I mean to get back to screenwriting and get my screenplays seen by production companies. One of the issues, especially in the UK, is that a company can accept a script, set the writer on a course of re-working and editing, and even find a broadcaster, but then one of the executives can dump it for no apparent reason. As a TV writer you never know where you are, and if your story does go all the way, it can take years for it to be produced and eventually shown. 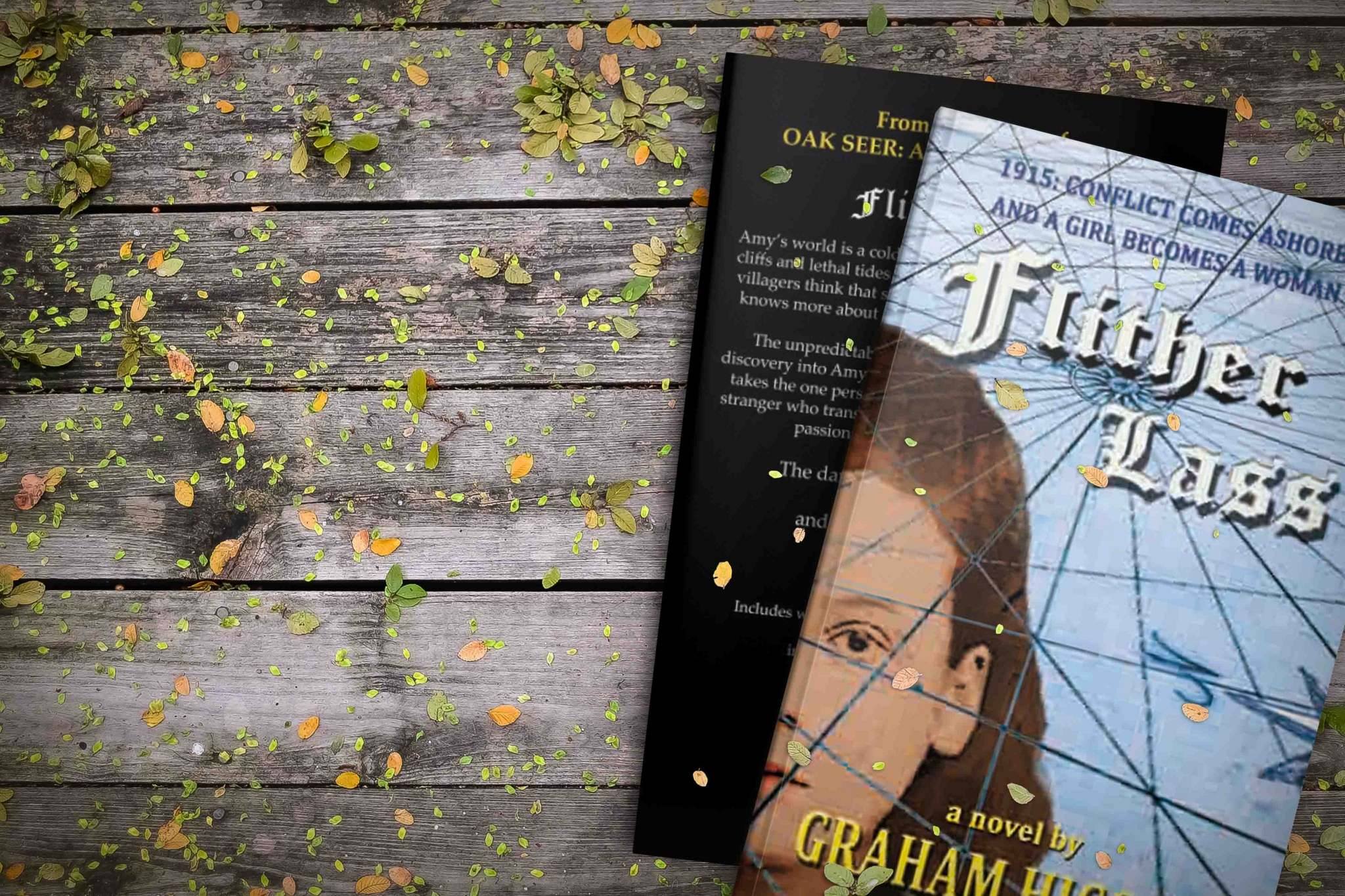 Susan Joyce:  What inspired you to write your first book?

Graham Higson: Creating a supernatural story was my means of getting to sleep when I was in hospital in 1988 whilst having eye surgery. I’d always wanted to write fiction, and over the next three years did some in-depth research–and there was no internet back then, so it meant wearing out shoe leather–and the book became Quercus Necromancer, eventually re-titled Oak Seer.

Susan Joyce: What is the most important life lesson you have passed on to your children?

Graham Higson: I hope I have passed on the value of a close family. That means a lot to me.
Susan Joyce: One last question. I love making something unique out of my thoughts and imagination. Why do you create?
Graham Higson: I like making things out of raw materials-whether that’s a log store from a pile of lumber (such as I’ve been working on this past week), or a story from a bunch of disparate ideas. I also like painting pictures, which just about confirms it. Maybe I was always meant to make stuff. So whether it’s tangible or virtual, it still provides a great deal of satisfaction.

Susan Joyce: Thank you for sharing your thoughts and creative adventures! Good luck with all your projects!

Graham Higson: Thank you, Susan. It’s been a pleasure speaking with you.
You can see all of Graham Higson’s books on his website:

How Much For a Little Screw?: Tales from Behind the Counter – fictionalized memoir
http://smarturl.it/littlescrew