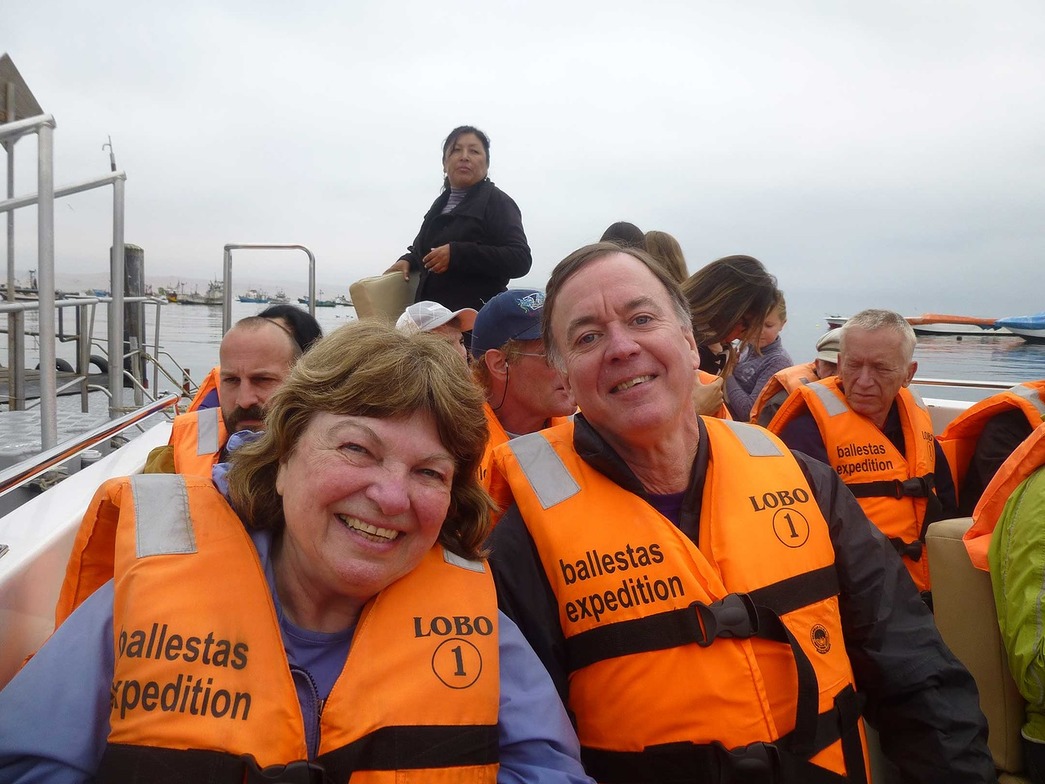 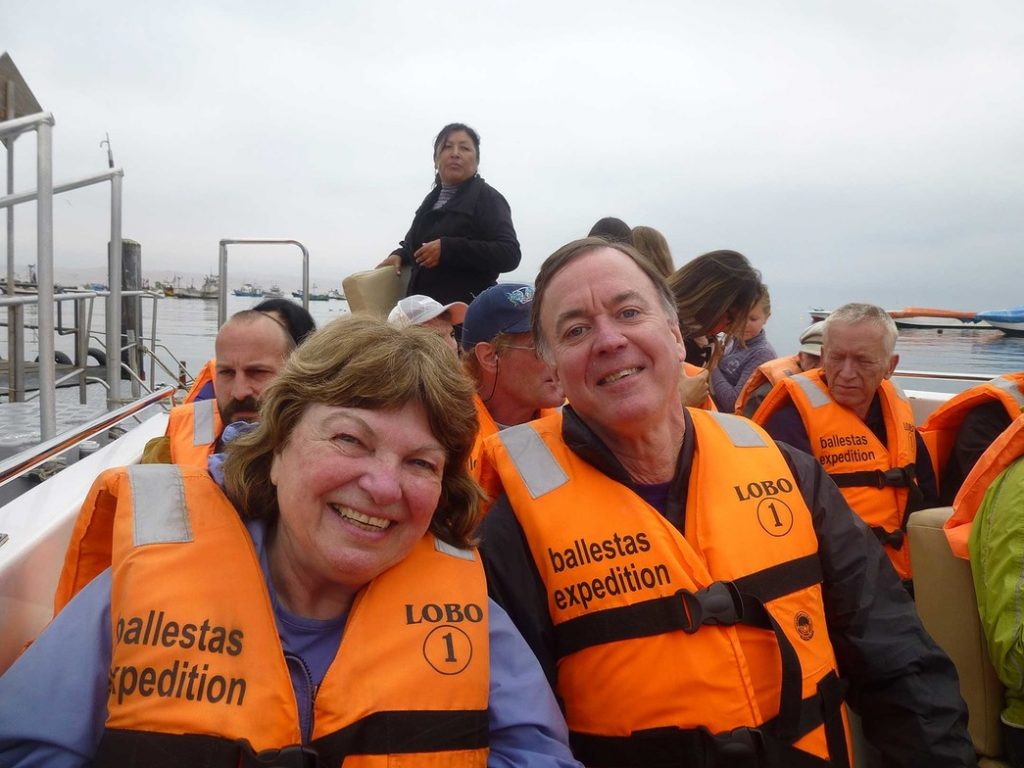 My husband Doug and I joined fellow travelers for an early breakfast in the hotel restaurant in order to be at the Paracas Port at 8:00 AM sharp and board the first fleet of sightseeing speedboats leaving for a tour of the Ballestas Islands. A group of rocky islands known for their abundant wildlife, the Ballestas are a protected home to thousands of birds and mammals including sea lions, Inca terns, the Humboldt penguins, and pelicans.

Visited by wildlife lovers from around the world, the Ballestas Islands are often referred to as Peru’s Galapagos. Tourists are not allowed to walk on the islands or swim with the animals but the sightseeing boats get you up close for a unique viewing of an important sanctuary for marine flora and fauna.

I recalled how my mom taught me the ‘handy’ way to distinguish the difference. ‘Flora sounds like a flower and fauna like a fawn.’ Plant life. Animal life. It did help me keep them straight on science tests. Snap. My mother was smart.

Our guide assured us that the 8 AM tour was the best possible time for good weather conditions and wildlife spotting. She said that winds and waves tend to get stronger later in the day and for this reason tours only leave in the morning when sea conditions are calmer. If the seas are too rough, the Navy closes the port and NO boats are permitted to leave.

Last minute, before boarding our bus for the dock, Doug reminded me to take my wind breaker with hood, in case it got chilly on the boat. We both took cameras hoping to see hundreds of sea lions and penguins, thousands of birds, and if lucky we might even see dolphins and take a dozen or so great photos.

We waited in a long line to board the waiting boats. I imagined calm waters and no wind. Perfect travel conditions. When the line began moving forward, I watched tourists load onto the first boat and was relieved to see life vests being secured for every passenger getting on board.

I touched Doug and pointed to the life jackets. “Remember Venezuela?”

I remembered the details. As author and illustrator of books for children, we were invited to speak and present writing and drawing workshops at the International School in Caracas in 1998.

Following our fun presentations in the school, we decided to join friends on a dive ship off the Caribbean coast of Venezuela and explore La Tortuga Island. It was named La Tortuga because marine turtles returned each year to lay their eggs on its long sandy beaches. Other than the seasonal fishermen the island was uninhabited. Untouched. Pristine.

Doug seemed surprised that I agreed to go along. After the harrowing crossing of the Indian Ocean in monsoon season in 1975, I hesitated to board any boat taking me too far from the safety of a shore. I decided it was time to let go of the fear.

The line moved forward and I inched back into today’s reality. Speedboats revved their engines when they left the pier and raced out to sea. The waters remained calm. Lucky us! We moved forward again and were directed down steps leading to a waiting boat. 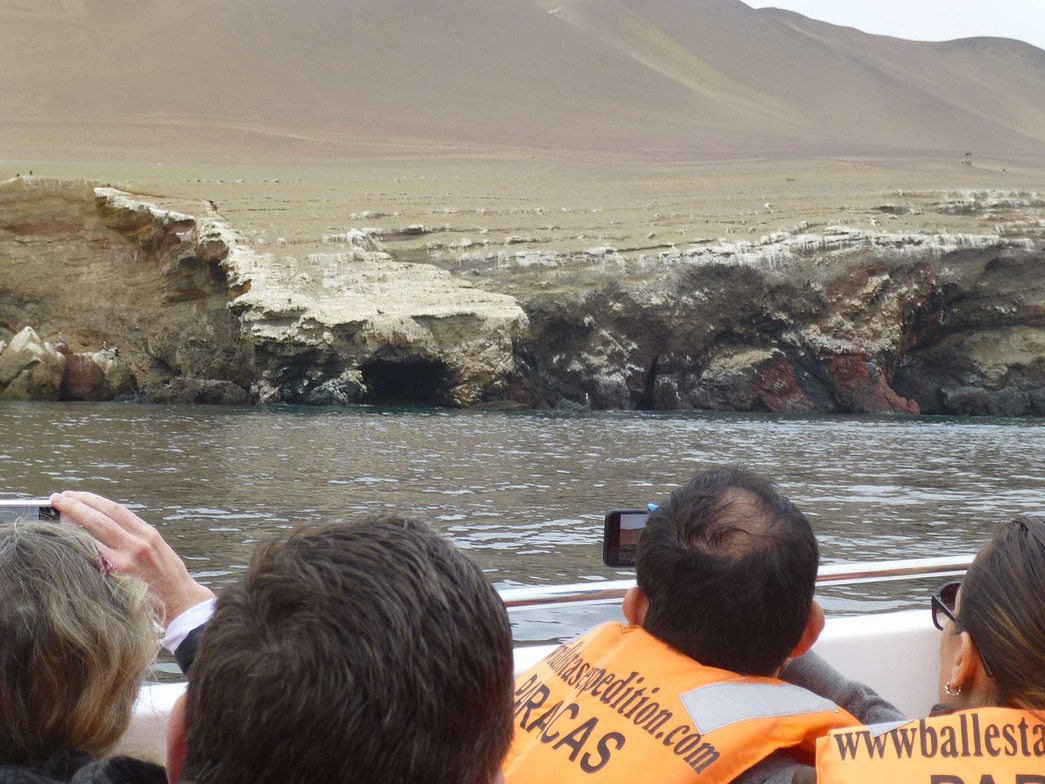