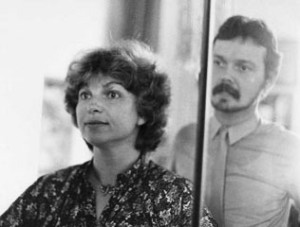 Michael is one of the main characters in my memoir because he greatly influenced my life. I adored Michael. My first close gay friend, he was just stepping out of the closet within the confines of friends when we met in Frankfurt, Germany in 1976. He became my solace at a low tide in my life and introduced me to the vibrant world of opera and theatre. He had an obsession with theater and anything presented live on stage. He had performed in a few shows in small theaters and his dream was to finish a play he had started writing years before and see it published one day.

“You’re the spitting image of a young Tony Randall,” I told him.

“And as fastidious and fussy, I trust.”

”You’re not fussy. Just choosy,” I assured him.

Michael of course then educated me on the origin of the phrase ‘spitting image’ and we both had a good chuckle. I fondly called him ‘Mister Walking Encyclopedia’ because he knew obscure facts and figures on any subject conceivable. Michael always knew the real scoop. He loved fancy words and loved to use them.

“Gaydar,” he explained eyeing an attractive waiter, “is how I know if someone’s straight or bent.”

I chuckled. “Did you just invent that word?”

He invited me to a play I hadn’t seen before at the English Theatre. “It’s a trivial comedy for serious people by Oscar Wilde. The second most known and quoted play in English after Hamlet.“

“This one’s a farce,” Michael said smiling, “The Importance of Being Earnest, first performed on Valentine’s Day in1895. It’s nonsense that makes sense, if you get beyond the words.”

“Sounds like a must see,” I said, wondering what the hell I was getting myself into.

I found the play a bit silly, but great fun. When the final curtain closed, we stood and wildly applauded again and again.

“Some wild expressions,” I agreed.

“Classic Wilde,” Michael continued, “They speak volumes about the hypocrisies of society. Then and now. Reprobates always have more fun.”

As we discussed the play’s “real” meaning over wine later that evening, Michael educated me on the dark history of the play and the eventual exile of Oscar Wilde.

“Ernest was Wilde’s alter-ego,” Michael informed me. “Dishonesty and pretense about morals damage our souls.”

Michael smiled and took another sip of wine. “His speaking out landed him in prison.”

“Indecency. Romping with a royal. Of the same sex.”

“Wow!” I said, letting it sink in. “His writing is harsh satire.”

Michael taught me many different things—some shocking, some fun, some frivolous, some serious, but all inspirational. All encouraging. He taught me about striving and thriving, and being different, and accepting differences in others.

Years later when I searched for the word “gaydar” in a dictionary, I realized that Michael may well have invented the word since the first known use, according to the Merriam Webster Dictionary, was in 1982.

When the final curtain closed on Michael’s life in 1986, he left a trail of love, light, and divine information. Too bad he didn’t live long enough to witness the gay civil rights happening today. But knowing Michael, he’s aware and smiling.