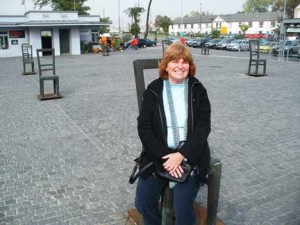 In October of 2008, my husband and I took a train from Vienna to Krakow, Poland. We wanted to see if trains were still a fun way to travel around Europe. We discovered that a lot had changed. I had visited Krakow in the early 70s when it was still behind the Iron Curtain. Seemed strange not to have a border guard come aboard every few minutes and demand to see passports when we exited one country and entered another. As we neared Krakow, a new and more visually charming town came into view. Was it because the sun was shining? My memory of Krakow was of a dark and dreary city where people shuffled from place to place as though sleep walking. Like an old photo—sepia tone without light.

We stayed in a newly renovated fourth floor, walk-up apartment in an old stone building, one block off the 13th-century Main Market Square. Our window views of historical houses and churches was awesome. Unlike other Polish cities reduced to rubble during World War II, Krakow’s skyline had survived unscathed.

By day we walked the cobblestone streets around the lively square (the largest medieval town square in Europe, covering 10 acres) and ogled and awed at ornate mansions and Krakow’s rich cultural heritage. We visited the elaborate St Mary’s Church with its two slender, spired towers reaching high above the city. Horse drawn carriages pulled by white horses pranced about, taking visitors on short city tours. We toured museums, saw the world famous painting, Lady with an Ermine, by Leonardo da Vinci at the Czartoryski Museum.

Krakow boasts of  numerous world-class sculptures and magnificent monuments including the famous Florian Gatea—a medieval watchtower erected in the 13th and 14th centuries.  Bronze statues and marble monuments are everywhere. and can be found on almost every city block. Standing on the Square of the Virgin Mary is a charming monument of  a pensive student standing atop a fountain crying tears that flow into “The Fountain of the Student.” A tribute to Veit Stoss (in Polish: Wit Stwosz), it was presented as a gift to the city of Kraków. The legend says that if you throw a coin in the fountain, you will return to Kraków.

We sat for hours in small pubs and cafes discussing Krakow’s pleasures and treasures. On one street, we viewed unique examples of communist architecture. My artist husband Doug was impressed with the fabulous street graffiti. By evening we dined in both rustic and chic restaurants. Krakow was indeed lively.

One day we  toured the famous Royal Wawel Castle and admired its picturesque Renaissance courtyard. We laughed at a fun monument to the Wawel Dragon by sculptor Bronisław Chromy. The sulfur eating dragon belched smoke out in fire-breathing bliss. On our walk back to the main square, we viewed a sculpture of a giant bronzed head,  another of someone on a horse, and a copy of the weighty “Battle of Grunwald.” As one of the greatest battles ever to take place in medieval Europe, it was a defining moment in Polish history. We stopped to appreciate a gorgeous sculpture of an orphaned pup “Dżok (Jock)” had a touching inscription, “Most faithful canine friend ever, and symbol of a dog’s boundless devotion to his master.” This work was created by the same artist who designed the belching dragon. A collection box in the back of the pup sculpture encouraged visitors to help orphaned animals of Krakow. There were monuments commemorating poets, artists, musicians,  homeland, science, patriotism and valor.

But the most impressive monument was in the “Ghetto Heroes’ Square” in Kazimierz (made famous by the film, “Shindler’s List” by Steven Spielberg).   Founded by Casimir III the Great, Kazimierz was an independent city from the 14th to 19th century. A place where Jews and Christians lived side by side in harmony. Until the 20th century.

Entering the square, I saw the eerie display of empty over-sized bronze chairs honoring the murdered Jews of the Podgorze Ghetto. I noticed markings showing the former ghetto walls in the pavement, and a sacred place to burn memorial candles.

Overwhelmed with emotion, I took a deep breath and blessed all who had been forced from their homes and ordered to bring their earthly possessions (tables, beds, chairs, etc) to the square. They were then rounded up and taken away. Most of the 17,000 ghetto inhabitants perished in the Nazi concentration camps of World War II.

I sat on one of the chairs and watched clouds roll past overhead for some time. My mind slowed to a stop as I thought of all the horrors humans have had to endure because of wars. I reflected on those bright minds whose lives were snuffed out senselessly. I thought of the Cyprus War of 1974 and the lives that were lost there and my own personal crisis when I had to flee from my home and leave
everything behind, including my beloved cat. I felt so grateful to have escaped Cyprus alive.