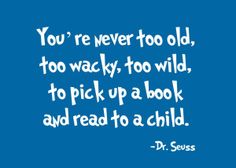 “Think left and think right and think low and think high. Oh, the thinks you can think up if only you try” – Dr. Seuss

I remember the day at the Tucson Public Library when I first discovered a book called “And to Think That I Saw It on Mulberry Street.” Published in 1937, the story turned 77 this year. It’s about a boy who wants to impress his father with an interesting account of what happens on his way home from school. So instead of seeing the same boring old horse and wagon on Mulberry Street, the boy imagines a zebra pulling the wagon. Then as his imagination kicks in and runs wild, the zebra morphs into a reindeer, the wagon becomes a golden chariot, and then magically changes into a fancy sleigh.

From that day forward, the different rhythmic lines in Dr Seuss’ children’s books stirred my imagination again and again. I enjoyed making up songs and stories; but I had dyslexia and my language skills needed help. When I tried to speak, my words got all mixed up and people laughed at me. My dad nicknamed me ‘Dutch’ because it sounded like I was trying to speak a foreign language.

My mother worked long hours teaching me how to read and write by putting the letters and sounds together in word puzzle games. By the time I was in the fourth grade, I was reading, writing, and telling stories that others understood. I wrote a short story about my dog Brownie and his bad liver breath, and how I loved him in spite of his bad breath. The story won first place in a competition, giving me confidence to keep writing.

I recently received a fun note from a book reviewer, and it got me thinking about thinking … left and right, low and high. Rhonda, the reviewer wrote, “It was a different reading experience, but then I love different.”

I smiled at the thought. My writing style is different. It is unique.

Check out her review of “The Lullaby Illusion” on her unique blog site.

I had never tasted, and was totally unaware of, eggplant (one of the world’s healthiest fruits, well technically it’s a large berry), until I landed in the Middle East to live there in the late 60s.  A few days after my arrival in Arad, Israel (a small village in the Negev Desert) a neighbor offered me a slice of warm pita bread and an Israeli dip made with roasted eggplant, tahini, and yogurt. “Yum,” I said, after my first bite, and reached out to sample it again, and again. I was hooked and asked for any and all eggplant recipes.

Years later while visiting the States, I went shopping for this royal purple, garden egg fruit. Not seeing it on display in the produce section, I asked for assistance. Forgetting the word for it in English, I asked for it using the Hebrew word —חָצִיל (hat-ze-leem). The produce man looked puzzled and asked me to describe it.  I told him it was a fruit, eaten as a vegetable, sometimes substituted for meat,  kind of egg shaped, with a heavenly purple, shiny skin. I then told him what it was called in French (aubergine), and in Spanish (berenjena). “Oh,” he said. “Eggplant!” and pointed to a display in a far corner of the produce section.

To this day, I still say חָצִיל (hat-ze-leem) in honor of my discovery of this amazing and delicious food—a must have in every Israeli or Middle Eastern meal. Back in the day, before ovens became a kitchen mainstay, many foods were cooked over an open flame. Gourmet chefs probably still stick a fork in the top end and slowly turn it until the skin is properly charred to give it a delicate smokey flavor. I find it equally delicious when roasted and charred in an oven. Over the years I have experimented with various eggplant recipes. Here’s one of my favorite.

Eggplant with Feta and Pine Nut Dip
Wash and dry two medium sized eggplants.  Pierce both sides with a fork to vent, then place them on a lightly oiled (olive oil) baking sheet and broil or bake for 30-45 minutes (turning them once) until they are charred and soft to the touch.

Cool slightly and peel, carefully removing every bit of the scorched skin, Discard the charred skin. Cut in half lengthwise and scoop out the pulpy flesh and place in a bowl.

My mom was an expert at writing shorthand. Before marrying my father, she worked as a clerk of court—took letters from her boss and recorded testimonies of court witnesses in the abbreviated symbolic method. After marriage, she no longer worked outside the home. She was too busy raising eight children. But she practiced her shorthand often by recording my father’s sermons (he was a preacher) in the brief form. I sat in awe watching her swiftly scribble symbols for words.

Word abbreviations and acronyms are not a modern invention. In ancient times, to reduce the time-consuming workload of the scribe, they were used to engrave coins, etch Greek vases, and mark religious icons. The Jesus Fish  or Ichthys (Greek word for fish, shown above) was a secret symbol of early Christianity.

Thanks to the spread of literacy in our modern world, spoken and written acronyms based on slang sayings have become the popular form of shorthand.

I remember witnessing the birth of the acronym “TGIF!” The phrase “Thank God It’s Friday” was first introduced in my corporate days in LA, in the mid 60s, and quickly became the abbreviated version. The first “TGI Fridays” restaurant opened in New York City in December of 1965 and now boasts a worldwide chain of popular restaurants where workers meet to celebrate the end of the workweek. Great name!

And now with the advent of texting, another wave of bizarre jargon is changing our spoken English language into a more abbreviated form. People from CA now write and say, “COO” for cool. “WUT” means “what” for people in a hurry, who can’t find the “h” and “a” keys fast enough. OMG expresses alarm. Four becomes 4. Too becomes 2. “IDK” should be used even more frequently because most people really don’t know.

Young people wanting to confuse parents have created their own form of language using a combination of shortened words with creative spelling and punctuation. Reads like babble to me, but it’s fun to try and decipher the meanings, while trying to learn this new lingo.

DWBH means “Don’t worry, be happy.” EOW means “End Of Watch.” LHM is “Lord Have Mercy” or “Lord Help Me.” YCALWB means “You’ve Come A Long Way Baby.” And I have. I’m learning a new language. WDUT?  TX for listening.