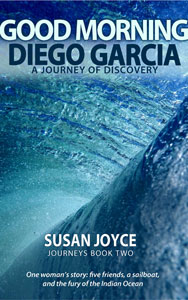 We arrived in India at 7:00 AM. On final approach, I pointed out to Charles the hundreds of shacks, surrounding the airport. Endless clothes lines strung across roof tops to dry laundry.
“Welcome to Bombay, gateway to India,” the flight attendant announced.
We pulled our belongings from the overhead bin, and waited for the cabin doors to open.
Exiting the plane with us was a beautifully dressed Indian woman, in a sari which appeared to have gold threads woven into it. “Be careful in the terminal,” she said in a thick British accent. “There are bands of thieves who steal valuables. Keep your suitcases close to you at all times.”
“In the airport?” I questioned.
“Yes, It’s terrible. Crime in India is out of control. The government needs to do something about it.” “Oh, thank you,” I said, “we’ll be careful.”

With only ten minutes to catch our scheduled flight to Madras, we stopped at the airline desk to ask them to hold the plane for us.
“What is your final destination?” the airline clerk asked.
“Colombo, Sri Lanka,” Charles answered.
“I’m sorry,” the airline clerk said. “It’s not possible. You’ll need to collect your baggage and pass through customs.”
“Customs?” I asked. “We’ll never make the flight.”
“I can book you on the next available flight to Madras in two days time, and on to Colombo,” she said.
We wondered aloud how to contact our friends in Trincomalee. No clue how to let them know.
“Surrender to fate,” I said.
“Not much we can do,” Charles said. “Book us on the next available flight out.”
“Since the delays are Air India’s fault, we will book you into a luxury hotel and pay your expenses,” the clerk informed us.
“Where will we be staying?” I asked.
“The Taj Mahal Palace Hotel,” she answered.
“The Taj Mahal?” I asked. “Fabulous!”
“It is,” she said. “It’s been renovated and is beautiful. It’s Bombay’s first harbor landmark and the first licensed bar in the city.”
“Sounds great.” Charles smiled.
“It’s legendary,” she said. “Ask the hotel staff to tell you about its history. The ballroom has a gorgeous view of the Gateway to India.”
“Exciting,” I said. “Thanks!” I turned to Charles. “Time to see the sights of Bombay.”
Charles nodded.
“But for now, all I want is a shower and a comfortable bed,” I announced.

With our tickets re-booked, we followed the crowd into the baggage area.
After two frustrating hours, we found our luggage and proceeded through customs.
We lugged our heavy suitcases along a long corridor in the direction of the exit. Charles walked ahead of me, trying to locate a bank so he could change money. Seeing none, he suggested I stay with the luggage while he explored.

I pushed our suitcases close together and stood waiting for him to return.
Disembarking passengers thinned out. All at once, the terminal seemed eerily empty.
Out of a side corridor, three young Indian men appeared, moving toward me.
I quickly straddled the suitcases and sat, legs dangling across them.
Approaching, they asked if I wanted help moving them.
“No, thank you!” I said, firmly. “I’m waiting on my husband.”
“We help you,” one young man said, reaching for a suitcase.
“No,” I shouted, looking around the terminal for help.

I noticed a sea of orange robes heading my way. A group of young women chanting and dancing in brightly colored orange saris.
“Hare Krishna, Hare Krishna, Krishna Krishna, Hare Hare, Hare Rama, Hare Rama,” their chant grew louder and their dancing got wilder as they neared.
The three young men backed away and disappeared into a dark passage.
When the dancers reached me, they smiled.
One introduced herself as a devotee of Krishna, and offered to sell me a booklet to benefit the starving children of India. Others continued to chant and sway.
“Where are you from?” I asked.
“New York,” she said. “And you?”
“I’m from LA. Why are you in India?
“We’re here to sell our books and spread the word about Krishna Consciousness, and build a temple to honor our Swami, Srila … ”
“There are thousands of starving children in New York,” I said.
“We worship the Hindu god Krishna as the one Supreme God,” another young woman chimed in, ignoring my comment.
“So you’re missionaries?” I asked.
“We’re evangelists. We believe in reincarnation …” one follower wanted to explain their beliefs, but another interrupted, while others continued to chant.
“I believe in reincarnation,” I said. “But I don’t think I need to sell it to others.”
They kept chanting and dancing around me.
“How many times do you have to chant this?” I asked.
“Sixteen,” a young woman answered.
I shook my head in disbelief. Where the hell is Charles?
“We’re vegetarians, and abstain from worldly pleasures,” the young woman said.
“Does chanting help?” I asked. I must have looked confused.
Another young devotee explained they practiced being celibate.
“No drugs or alcohol,” another chimed in. “The temple will be our heaven on earth when it is completed.”
They tried again to sell me the book.
“No. But thanks,” I said, my eyes searching the corridor for Charles and grateful for the diversion which drove off apparent predators. What was taking him so long?
When the Krishna believers realized I had no intention to purchase a book, they moved on.

I looked again for Charles and sighed, relieved to see him coming back. His smile told me he had found a place to exchange money.